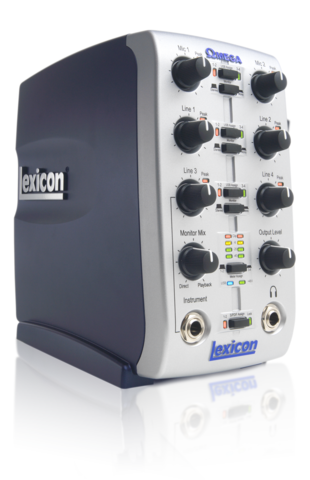 Larger Images
Due to updates to Mac OS X, El Capitan is not supported on the following class-compliant devices: Omega, Lambda, Alpha.

CONTAINS ALL THE COMPONENTS NECESSARY TO TRANSFORM YOUR COMPUTER INTO A PROFESSIONAL 24-BIT RECORDING STUDIO.

The recording professionals at Lexicon Pro know a thing or two about great audio - that famed Lexicon reverb "sound" has been on just about every hit recording since we invented digital reverb more than 30 years ago. So when we set out to bring that sound home - we got truly inspired.

Nothing is more frustrating than buying a "recording system" only to find out that you need a gaggle of extras just to make it all work. Omega Studio is a completely integrated computer recording system that includes the Omega 8x4x2 USB I/O Mixer, Steinberg's® Cubase LE 5 audio and MIDI recording software, and Lexicon's world-class Pantheon VST Reverb plug-in. The Omega Desktop Recording Studio quite literally contains all the necessary components to transform your computer into a professional 24-bit recording studio - all in one box.

Unlike standard computer I/O boxes based on a patch bay concept, the Lexicon Omega Studio is designed and built around the same paradigm as large-format recording consoles. An 8-input, 4-Bus, 2-output USB I/O mixer with inserts, instrument input, MIDI I/O and complete metering and monitoring functions gives you the freedom to record up to 4 tracks at once and mix without the need for additional mixing hardware.

Two dbx Silver Series® mic preamps with 48V phantom power provide a pristine front end for high-end condenser or more common dynamic microphones, insuring premium sound quality from the first take to the last. TRS insert points allow you to plug in your favorite dynamic processors before the signal reaches one of the 4 busses, where 24-bit converters transform the analog signal into a digital masterpiece.

Four servo-balanced TRS line inputs with up to +22dBu input levels let you hook up everything from keyboards to guitar preamps, including high-output professional gear. Stereo digital inputs are available via SPDIF jacks, and an additional high-impedance instrument input is included on the front panel for easy access to guitars and basses.

Finally, a fully opto-isolated MIDI input to ensures that there is no annoying ground loop hum or MIDI talk-through noise common with many I/O boxes and sound cards; MIDI output has rock-solid synchronization to USB frame rate to support applications requiring critical sync.

The Omega I/O mixer also features channel peak indicators for each analog input as well as an assignable bargraph meter for the 4 busses. By monitoring the signal before the A/D converters, clipping and distortion can be averted, unlike software-only level monitoring that can miss "overs", ruining the track.

All these gazintas and getoutzas are put together just like a big recording console, with input gain controls, four recording busses, and full monitoring features, in one attractive, portable I/O Mixer. Just plug it into your Mac or PC computer with the included USB cable, and you're instantly ready to capture the moment.

The driver doesn't install on Windows 8 / Windows 10. How can I get it to work?

Currently by default Microsoft has an option that can prevent some of Lexicon's drivers from installing properly. This option can be turned off through Windows Advanced Boot options menu. Lexicon recommends to follow THIS guide using the procedure in option two. For any reason you still have issues feel free to let us know at: Support@Lexiconpro.com