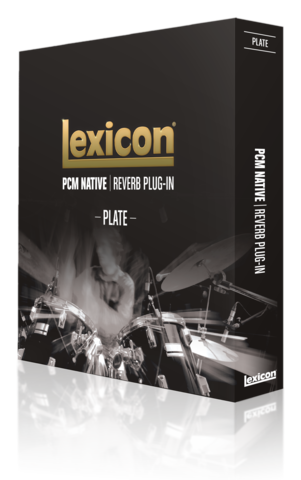 Drawing upon over thirty-five years of being the audio industries pre-eminent maker of hardware digital reverb and multi-effects units, the Lexicon Native Plate Reverb is in a class of its own. As part of classic pieces like the lexicon 224 and 480XL, our plate reverbs have been used to define the sound of thousands of albums and now you can apply these world class algorithms to your mixes through this powerful plug in.

Plate reverbs are renowned for their bright, clean tone. Because they have no pre-delay, they are ideal for percussive instruments. This lack of pre-delay also creates the effect of distance, which makes plate reverbs a valuable effect for backing vocals or any other instrument that needs to be present, but not at the forefront of the mix. Providing a gentle ‘mellowing and thickening’ of the initial sound, plate reverbs are a vital part of any mixing arsenal.

“My favorite reverb is plate, because it sounds like a space, but not a space that really exists. It’s an idyllic space that can go from small to large and back down to earth.”

Lexicon plate reverbs have been used on thousands of records from the late 1970's on. When artists and mixers were looking for a Plate that could stand up to the classic sound of an EMT, but was far easier to use and maintain, they have turned to Lexicon.

“The sounds of the PCM Native Reverb Plug-In's are classic Lexicon – rich, deep and enveloping, and they can elevate a mix from being merely good to being absolutely captivating. In addition, the ability to tweak parameters to get exactly the sound quality you want, and then be able to save those settings and recall them instantly is a powerful advantage.”

The PCM Native Plate Reverb is also available as part of the TEC Award nominated PCM Native Reverb Bundle. For other variations on Lexicon plate reverb, please look at the PCM and MX hardware series or the MPX, LXP or PCM Vintage Plate Reverb plug-Ins