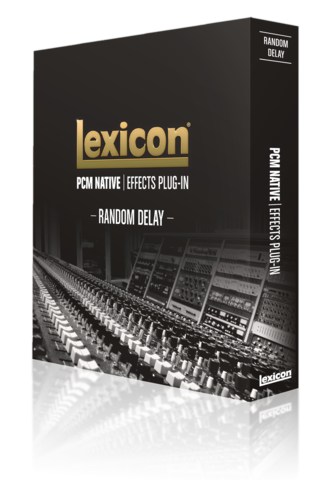 When Lexicon® invented digital delay, it changed the game. Previously, delay was tape-based, which sounded great but was very imprecise, and because of its highly mechanical nature, could breakdown easily. The PCM Native Random Delay is the best of both worlds - the precision of digital delay with the ability to add in a ‘random’ nature.

The Lexicon Random Delay algorithm has the same diffusion controls as the Dual Delay algorithm, but it builds upon them by adding additional LFO control and a second delay parameter (called “Wander”). The Wander parameter provides up to one second of additional delay time for each voice. Voices can be assigned to either randomize or not randomize. The Random Delay plug-in is especially useful for: Multi-Tap Tape Loops, Early Reflection Modeling (placing early reflections in stereo or surround fields), and Modulated Delays (delay times may be modulated by signal level, LFO, or random values).

A Brief History of Delay:

Delay effects first gained notoriety as part of the ‘Musique Concrète’ movement of the early 1940’s in France. A decade later, the effect began to find its way into popular music via commercially produced tapes echos. Although tape-based delays never lost popularity as a sound, the stability and programmability of digital delays, starting in 1971 with the Lexicon® Delta T-101, lead to a new revolution in sound that has dominated for over 40 years.

We may have started the revolution, but we didn’t stop there. Lexicon has been as synonymous with delay as it has been reverb in studios around the world, and the PCM Native Random Delay we have a created a tool that bridges the past and the present, giving you a host of options for creating your sound.

The PCM Native Random Delay is also available as part of the PCM Native Effects Bundle. For other variations on Lexicon Delay, please look at the PCM and MX hardware series or the PCM Native Dual Delay.