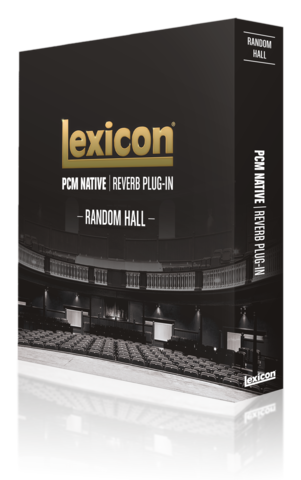 The idea behind the Random Hall is simple – take everything that is incredible about the sound of a Hall and then add elements that you cannot achieve in the physical world. Original, unmistakable, the Lexicon Random Hall is in a class of its own.

One of the classic Lexicon® reverbs, the Random Hall algorithm is similar to the Hall algorithm. However, its reverberators change over time in controlled, random ways to avoid the buildup of tinny, grainy, metallic, or other colorations. The modulation can be noticeable and is often a desirable effect. One of its charms is a bit of irregularity in the decay. The Random Hall plug-in, much like the Hall plug-in, is well suited to complex sounds like orchestral music, but can serve very useful for contemporary music as well.

If a digital reverb couldn’t accurately represent a hall, it would be a nice, but limited tool. Lexicon has mastered the intricacies of this 3-dimensional space and enhanced the experience with layer upon layer of configurable options. With the Random Hall, we’ve taken it a step further, allowing your mixes to move into completely uncharted territory.

"The native PCM plug-in is killer!! The fact that you guys were able to really nail the vibe of the
PCM96 hardware AND allow me to run lots of instances per session is a no-brainer”