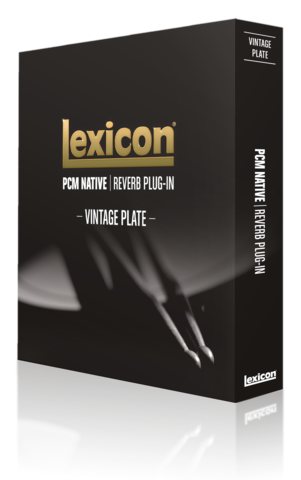 Drawing upon over thirty-five years of being the audio industries pre-eminent maker of hardware digital reverb and multi-effects units, the Lexicon® Native Vintage Plate Reverb is in a class of its own. From the Lexicon® 224 to the PCM 96, our plate reverbs have been used to define the sound of thousands of albums and now you can apply these world class algorithms to your mixes through this powerful plug in.

The Lexicon® Vintage Plate algorithm mimics the sound of plate reverberators, but it differs from the Plate algorithm in that it has characteristics of older plate implementations, the updated equalization touches from the PCM96 plate, different input diffusion, and an additional pair of echo voices. With high initial diffusion, a relatively bright, colored sound, and vintage character, the Vintage Plate plug-in is well suited for percussion and vocals and is useful for all popular music.

Lexicon® plate reverbs have been used on thousands of records from the late 1970's on. The PCM Native Vintage Plate is the logical continuation of Lexicon’s Plate Reverb heritage.

‘Dense, deep and wide is not how I would usually describe plug-in verbs but Lexicon somehow pulls it off. The display is awesome, and the parameter selection gives you everything you would expect from a pro piece of gear.’