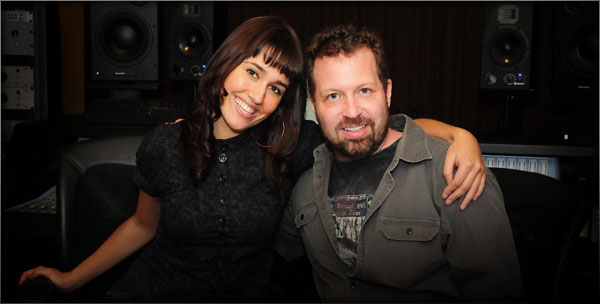 SALT LAKE CITY, Utah – While searching for the ultimate sound combination to complete the freshman album of pop singer Jenna Andrews, GRAMMY® and EMMY® Award-winning producer Andy Zulla, deployed the Lexicon PCM Native Reverb Bundle to develop one of the most unique-sounding albums to date for the young Toronto native.

With influences stemming from Hip Hop, R&B and Pop, Andrews had visions of an album with a sound combining a blend of retro-sounding, wet mixes and a contemporary, dry and tight mix. Zulla knew he would have to summon the perfect reverb that sounded full and dense, while also having a transparent, non-existent feeling. Having sold his Lexicon 480L and 960 before taking on this project, he hadn’t realized that hitting this perfect mix without them would be difficult.

“The problem was once we went for a dense reverb, it became very clogged and heavy; very lifeless yet very apparent,” said Zulla, Mixer of multiple number-one hits and more than 20 gold and platinum records for artists such as Kelly Clarkson, Jessica Simpson and Rod Stewart.

“After purchasing every reverb plug-in available as well as libraries and libraries of impulse responses, I realized I could find nothing to replace my Lexicon 480L and 960 reverbs, until now. The new Lexicon PCM Native Reverb Bundle delivers that lush Lexicon depth and fullness that nothing else can even come close to! Back are the days of just pushing up the fader and having the reverb sound instantly great without even trying,” continued Zulla. “It has the ability to create lush spaces but at the same time allow the mix to sound dry, tight, and modern. We ended up using the PCM plug-in on everything, all over the album.”

Zulla and Andrews’ completed album, ‘The Moon And The Stars’ on Island Records, will be released in the summer of 2010. Her first single, ‘Tumbling Down’ was released May 17, 2010.

“Computer technology has finally advanced to the point where it is able to efficiently run our complex algorithms natively,” stated Rob Urry, President, Harman Music Group. “The use of the PCM Native Reverb Bundle by world class professionals such as Andy is a testament to the Lexicon brand and our success in this platform environment.”

The PCM Native Reverb Plug-In Bundle is ideal for recording and post-production environments where unsurpassed quality is required. It is a fully functional cross-platform plug-in that is compatible with Windows® XP, Vista, and 7 along with MAC® OSX 10.4, 10.5, 10.6. It is available now with a suggested retail price of US $1899. To activate a free 7-day trial of the Plug-In, a user can visit www.lexiconpro.com for an iLok™ authentication key.

Lexicon is a unit of Harman International Industries, Incorporated (www.harman.com). HARMAN (www.harman.com) designs, manufactures and markets a wide range of audio and infotainment solutions for the automotive, consumer and professional markets – supported by 15 leading brands including AKG®, Harman Kardon®, Infinity®, JBL®, Lexicon® and Mark Levinson®. The Company is admired by audiophiles across multiple generations and supports leading professional entertainers and the venues where they perform. More than 20 million automobiles on the road today are equipped with HARMAN audio and infotainment systems. HARMAN has a workforce of about 11,000 people across the Americas, Europe and Asia, and reported sales of $3.2 billion for the last twelve months ended March 31, 2010. The Company’s shares are traded on the New York Stock Exchange under the symbol NYSE:HAR.