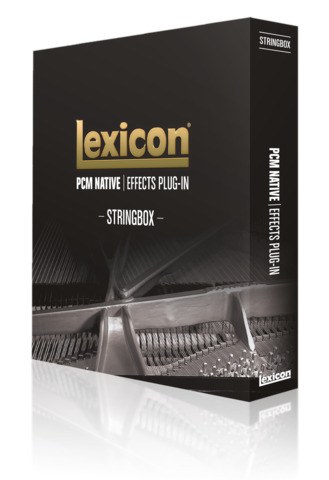 Lexicon® has been doing effects for so long, it’s easy to forget that they are not only an innovator, but in many cases, an originator. The Stringbox is an original, to be sure. This is an effect that is so powerful, it is less an effect and more an extension of the instrument it is applied to.

Have you ever made a sound near a piano? When there is sound energy at the frequency of a string (or a multiple thereof), that string will vibrate by sympathetic resonance. By holding down different combinations of keys, a ghostly harmony can be created. The Lexicon® Stringbox algorithm is a resonator which simulates this effect. It has 88 virtual strings and allows the user to select which strings are held down. Parameters provide control over tuning, panning, pre-delay, tone, chorus, level, decay, and damping. The Stringbox plug-in creates eerie and ethereal effects. It’s unlike anything else in your plug-in arsenal.

A Brief History of Resonance:

Resonance is caused by the naturally occurring variance of amplitude of frequencies within any given system. It’s a basic principal in physics that is in play all around us. In the frame we are addressing, it is most noted as part of synthesis via instruments or through ‘filter’ effects. The exaggeration of resonance, which is really a sort of ‘EQ on steroids’, creates an ‘other-worldly’ effect that has many applications.

The PCM Native Stringbox effect is so unique it is hard to quantify, but the genesis of it comes out of decades of research and design drawn from some of the most famous effects units ever built. This is resonance applied in a way you have never been able to access it before, and when you use it, your mixes will separate from the pack.