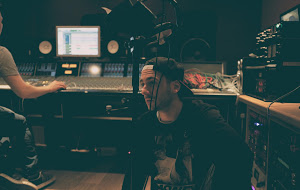 SALT LAKE CITY, Utah – Michalis “MsM” Michael is a talented recording and mixing engineer from London. With tastes ranging from Greek music to grime, his credits include Ed Sheeran, Royskopp and Robyn, DJ Fresh, P.Diddy and many others. HARMAN’s Lexicon has been a constant in Michael’s variegated musical life, including his latest project with up and coming singer/songwriter Zak Abel. Michael used the Lexicon PCM Native Reverb Bundle extensively on Abel’s first Atlantic Records EP, Joker Presents Zak Abel, mixed by Michael and produced by acclaimed UK record producer Joker. “The first reverb I remember hearing was a Lexicon – my dad had an old one that was purple if I remember rightly and even then, the sound grabbed me. My dad is highly regarded in the Greek music scene and would always say to me that Lexicons are the best. So I just grew up with that in mind. Another one of my earlier mentors, Tony Matthew, also used to teach me a few things about mixing on a console and a Lexicon was always involved.”

Over time Michael has used a variety of Lexicon reverb and effects units, and the progression to the PCM Native Reverb was a natural evolution. “Lexicon has made the transition from hardware to plug-ins brilliantly,” he noted. “Hardware and plug-ins both have their place and I’m glad Lexicon offers both, but the flexibility and ease of use of the PCM Native Reverb is hard to beat and the perfect complement to the way I work mixing ITB.” The PCM Native Reverb was Michael’s go-to reverb on this Joker Presents Zak Abel. “Because the majority of the drums were programmed, I found the PCM bundle invaluable for making the drums sound more natural and ‘live’ as opposed to artificial and ‘canned.’ In fact, for this project and the other work I do most of my programmed drum kits get some form of Lexicon Room reverb to add depth and presence. And getting a great drum sound is the foundation of getting a great recording."

“The Lexicon PCM Native Reverb bundle is a crucial part of my mixing process and can bring the space and depth I need to any project I’m mixing. I’ve got a few tricks I do with the plate reverbs that I don't mix without” Michael concluded,” Michael concluded. “Myself, Zak and Joker are thrilled with the way the EP came out and we think it’s going to win a lot of people over.”