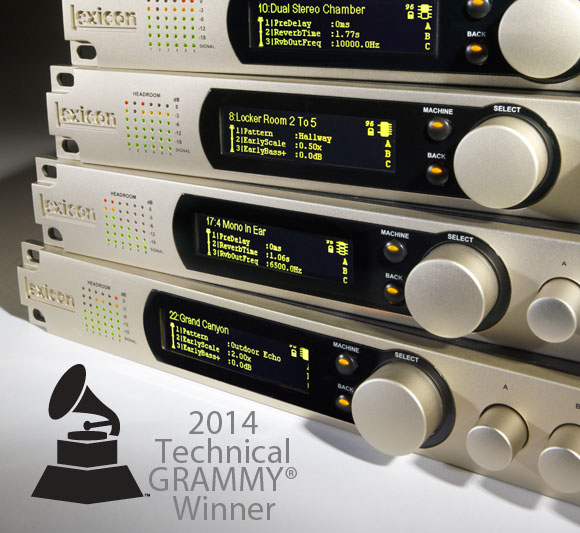 STAMFORD, CT – Harman International (NYSE:HAR), the premium global audio and infotainment group, announced today that its Lexicon® brand has won a Technical GRAMMY® Award, which is presented to individuals and companies that have made contributions of outstanding technical significance to the recording field.

The National Academy of Recording Arts and Sciences announced their Special Merit Awards earlier today. Recipients are determined by vote of The Academy's Producers & Engineers Wing Advisory Council and Chapter Committees, as well as The Academy's Trustees. This year’s Technical GRAMMY Award recognizes Lexicon’s contributions to the art and science of music recording and reproduction through innovation and excellence in product design. The Lexicon brand is in rare company: the only other such award is being presented posthumously to Emile Berliner, who invented and patented the “Gramophone” sound recording device in 1887.

“We are deeply honored that yet another HARMAN brand has been recognized with a Technical GRAMMY Award,” said Paliwal. “Lexicon products have long been admired both by recording industry professionals and the discriminating audiences they serve, and we are proud to be the only audio systems company to have received this prestigious validation multiple times from the Recording Academy.”

Founded in 1971, Lexicon is one of the world's premier manufacturers of digital effects processing electronics and home theater systems. The company was among the first to produce commercially-available digital reverb systems which is used by 80 percent of recording artists, and was also an early pioneer in the hard disk recording sector. Lexicon also markets premium amplifiers for luxury cars, home theater and distributed audio applications, featuring the brand’s exclusive Logic 7® surround sound processing algorithm.

“Earning this GRAMMY is a testament to the remarkable passion that Harman puts into the science of recording and reproducing great sound,” said Augsburger. “I am very proud of the contribution that our Lexicon team has made in creating some of music’s most memorable impressions, and congratulate my colleagues on this milestone achievement.”